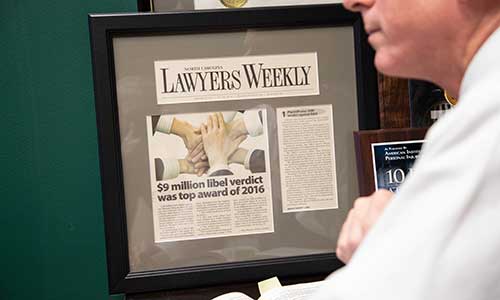 9 Million Dollar Verdict is Top Verdict in North Carolina for 2016 as Reported by Lawyers Weekly!

On a summer afternoon, Mr. Johnson’s client was mowing the lawn at the residence of a friend house in Raleigh. The property line running along the back of where he was mowing the lawn runs alongside and is adjacent to the back of the yard of a house which was being kept two Pit Bull dogs. The dogs were owned by young men that were renting this house from the owner.

As Mr. Johnson’s client was mowing the lawn adjacent to where these dogs were being kept, he saw the two Pit Bulls on the other side of the fence. The Pit Bulls were looking in his direction, they were barking in a vicious manner and they were running alongside the interior of the fence. Our client, however, believed that the Pit Bulls were securely confined inside the fence, and therefore, he did not pay very much attention to the dogs.

As he continued mowing the grass, suddenly and without warning, he noticed out of the corner of his eye that one of the two Pit Bulls had escaped from the confines of the fence and was running directly towards him and barking in a vicious manner. He saw the second Pit Bull directly behind the first Pit Bull crawling under a loose section of the fence and this dog also then came running directly after the first one and directly towards him, also barking viciously. He turned the mower around towards the direction of the Pit Bulls and attempted to use the mower as a shield to prevent the dogs from getting to him. This did not stop the dogs. One of the dogs began biting and attacking the mower. Before he had a chance to make any other move to get away, one of the dogs attacked and bit into his right foot. He fell down. The dog that had bit into his right foot would not let go of his bite. While this dog was biting down and holding onto his right foot, the other dog began attacking, biting and chewing on his right leg. While he was lying on the ground, he began using his left foot to try to kick the dogs away. Eventually, he was able to slide his right foot out of his shoe. This enabled him to get away from the dogs just long enough to stand up, run away and escape.

Our biggest fight in this case, however, was with the insurance companies for the landlord and the individual owners. They argued that they did not have to cover this type of injury in this case. We had to file a separate declaratory judgment action against the insurance companies in order to convince them they had to provide coverage for our client’s injuries. Eventually, after years of litigation, we were able to successfully obtain a settlement in the amount of $101,000.00.