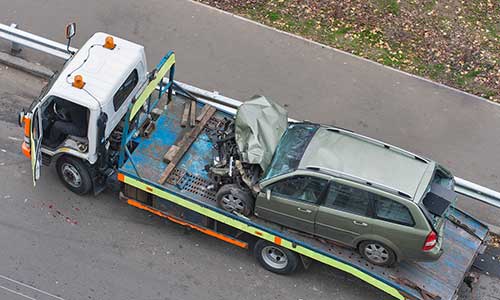 Mr. Johnson’s client was driving a Dodge pick-up truck northeasterly on the on-ramp for traffic exiting off of I-485 and onto I-77 north in Charlotte. He was in the process of moving from Georgia to West Virginia and was pulling a U-Haul trailer. He had a full load in the bed of his truck. One of the items in the bed of the truck was a cement mixer. He felt an unusual pull or jerk on the U-Haul trailer and thought the trailer might have a flat tire. He pulled off the right side of the road and onto the shoulder of the road. He moved his truck and the U-Haul completely off the roadway and onto the shoulder and came to a stop. He then got out of his truck to check the trailer and found that the trailer did not have a flat tire. He then got back in the driver seat of his truck and was getting ready to start his engine.

The impact of the tractor-trailer landing on top of our client’s U-Haul and truck forced the cement mixer in the bed of his truck through the passenger area of the truck. The cement mixer rammed into the back of his seat and impacted with the back of his head and his right shoulder. The tractor-trailer slid further down the highway on its side and came to rest in front of our client’s truck. As a result of the collision, Mr. Wilson suffered severe injuries including a painful injury to his right shoulder initially thought to be a shoulder strain/sprain that was later determined to be a labral tear requiring extensive physical therapy.

The insurance company initially disputed that Mr. Johnson’s client’s shoulder injury was related to the collision. They also initially tried to argue that our client was partially at fault for pulling over on a part of the road that was not safe. We had to file a lawsuit and after extensive litigation, including numerous depositions, we successfully obtained a settlement at a mediated settlement conference in the amount of $140,000.00.