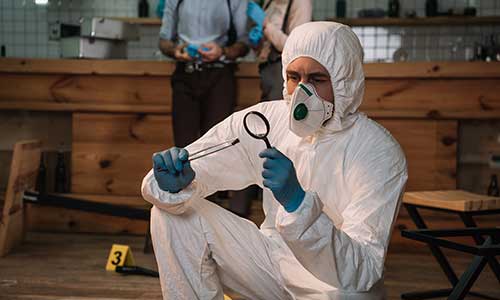 9 Million Dollar Verdict is Top Verdict in North Carolina for 2016 as Reported by Lawyers Weekly!

In 2006, North Carolina expert firearms examiner Beth Desmond was asked to examine some bullet fragments and shell casings from a homicide crime scene. The incident occurred in Ayden, North Carolina and involved the accidental shooting and death of a small child. There was only one suspect that had been seen at the scene firing a gun, Jemaul Green. Green was charged with murder. His girlfriend, Vonzeil Adams, was also charged with murder.

Desmond performed a detailed microscopic analysis of the rifling impressions on the fragments and casings in her laboratory office at the North Carolina State Crime Lab. She used a comparison microscope, which is a specially designed microscope that allows a firearms examiner to look at two specimens at the same time. It also has specialized lighting that lights all sides of the specimen evenly, without any shadows. After performing her examination, Desmond determined that the shell casings had been fired from the same firearm. Regarding the bullet fragments, she had been given six fragments. She determined that two of the six fragments had been fired from the same make and model of gun, but she was not able to say that the two fragments had been fired from the exact same gun. She was not able to make any determination as to the other four fragments.

Jemaul Green was tried and convicted in 2006. Numerous eyewitnesses to the shooting testified at trial. Desmond also testified to her ballistics opinions. Vonzeil Adams was tried in 2010. Many of the same witnesses testified in the Adams trial, and Desmond again testified as to her opinions. Adams was also convicted.

Towards the end of the Adams trial, the defense attorney for Adams had an associate take some layman’s photographs of the bullet fragments that had been the subject of Desmond’s testimony. In the photographs, it appeared that the two fragments that Desmond had testified had come from the same make and model gun had different rifling impressions, which could indicate Desmond was wrong in her analysis.

The defense attorney secured a preliminary opinion from an outside expert that the photographs should be sufficient evidence to warrant having an independent firearms expert reexamine the bullets to determine whether Desmond was right or wrong in her analysis.

Mandy Locke was aware that the bullets were going to be re-examined. However, instead of waiting for the results of the re-examination, Locke began trying to find a qualified firearms examiner that would make a definitive statement that Desmond was wrong just by looking at the layman’s photographs that the defense attorney had secured. The experts did say that the rifling impressions on the fragments appeared to look different in the pictures, however, none of the firearms experts that Locke spoke to were willing to make any definitive statement regarding the bullet fragments without looking at the actual fragments themselves, in a laboratory setting under a comparison microscope. Nevertheless, in August 2010 Locke and the News and Observer published a story about Beth Desmond as part of a four-part investigative journalism series regarding malfeasance at the North Carolina SBI called “Agent’s Secrets.”   In this article, which again was published before the re-examination of the bullets had been performed, Locke and the News and Observer stated that the experts Locke spoke to had made definitive statements that Desmond was in fact wrong in her analysis. None of the experts she spoke to ever made any definitive statements. The News and Observer also stated in this article that “[i]ndependent firearms experts who have studied the photographs question whether Desmond knows anything about the discipline. Worse, some suspect she falsified the evidence to offer the prosecutors the answers they wanted.” None of the experts Locke spoke to ever made these statements to her.

In another section of the article, the News and Observer quoted one of the experts Locke had spoken to as saying,

“This is a big red flag for the whole unit,” said William Tobin, former chief metallurgist for the FBI, who has testified about potential problems in firearms analysis. “This is as bad as it can be. It raises the question of whether she did an analysis at all.”

Bill Tobin never said this with regard to Beth Desmond’s work. Tobin testified that if he made this type of comment, it was only in response to a hypothetical posed by Locke in which she asked him what does this mean assuming that in fact the independent re-examination determines Desmond is wrong.

The News and Observer included numerous other statements that were exaggerations and misquotes from the experts that Locke spoke to that were intended to convey the message that Desmond was, in fact, wrong in her analysis, when all of the experts were saying they couldn’t say whether Desmond was right or wrong until the bullets were re-examined.

Four months after the Article was, the bullets were re-examined by a qualified independent firearms examiner, Dr. Stephen Bunch from Virginia. Dr. Bunch’s examination corroborated Desmond’s findings. Desmond, in fact, had been right in her report and opinions.

Both before and after the results of Bunch’s re-exam were published, the August 2010 N&O Article had a huge impact on Desmond’s career and home life. She was repeatedly questioned in court with the article by defense attorneys. District Attorneys requested that she not be allowed to work on their cases. She suffered embarrassment and humiliation when attending national firearms conferences. Her name and picture had been included in the Article, so she became extremely fearful of retaliation from the families of the defendants in the original criminal case. Bomb threats were called into the Crime Lab. She became unable to focus or concentrate on her work. She was taken off casework and was eventually transferred from the Crime Lab. She was later diagnosed with Post-Traumatic Stress Disorder.

The trial of this case was conducted over a 3 ½ week period in September and October of 2016. All of the experts Mandy Locke purportedly relied upon testified. Beth Desmond’s treating mental healthcare providers testified. Forensic Psychiatrist Dr. Moira Artigues testified that Beth Desmond’s psychological struggles were a direct result from the N&O Article.

It should be noted that this case is currently on appeal to the North Carolina Court of Appeals.