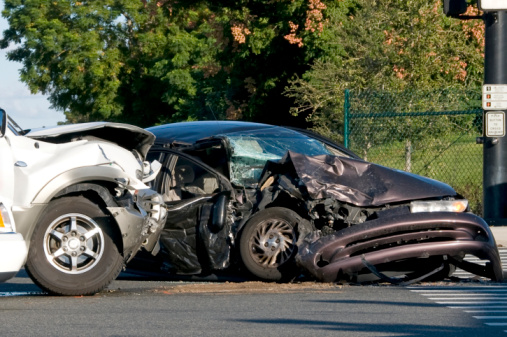 Mr. Johnson’s client was driving north on Capital Blvd., approaching the intersection with Wake Union Church Road. The Defendant was driving south on Capital Blvd in a large SUV owned by a local landscaping company. As our client approached the intersection, the traffic light for her direction of traffic was emitting a steady green light. So, she cautiously began to proceed through the intersection. The Defendant, however, who was approaching the intersection from the opposite direction, failed to yield the right of way and suddenly and without warning attempted to make a left turn at the intersection in complete disregard of the oncoming traffic and directly into the path of our client’s direction of travel. The front end of her vehicle violently collided into the right passenger side of the Defendant Vehicle. She suffered suffered severe injuries, including a severe left knee laceration, a left knee sprain, numerous other lacerations and contusions, sprains to both of her hands, a herniated disc at L5-S1 requiring surgery, and aggravation of a pre-existing hip condition requiring additional surgery for hip replacement.

Initially the insurance company refused to consider Mr. Johnson’s client’s hip surgery as being related to the collision. We had to file a lawsuit, and after extensive discovery, including depositions, we successfully obtained a settlement at mediation for $300,000.00.